Red Pen-marks are not scars on the soul.

Juris Lunence just went live yesterday. It’s the origin story of one of my favourite characters in To Drown in Sand, mainly because when he stepped on stage in my mind, I had no idea who he was. Then he started doing Very Awesome Things, and became a lynchpin plot figure for the climax of the novel.

Juris marks the first time I’ve gone beyond Beta and self-editing, and it shows. My amazing editor, Chad Horton, graciously offered to edit for me pro bono. His warnings were clear:

“I will be merciless.”

And, thank the Saints, he was.

This is what I got back,over a very nice lunch.

What surprised me, though, was that no tears fell onto my Fish and Chip dinner.

Instead, I was more excited than ever before. He had magically taken my work, sensed exactly what I was trying to do with it, and pushed me back to tweak the language and structure. I learned so much from rewriting Juris that I shudder to think what it would have become without him.

Yes, there were rewrites and revisions afterwards. Typos caught and created, little mice to chase through the pages. But the PLAN was clear. 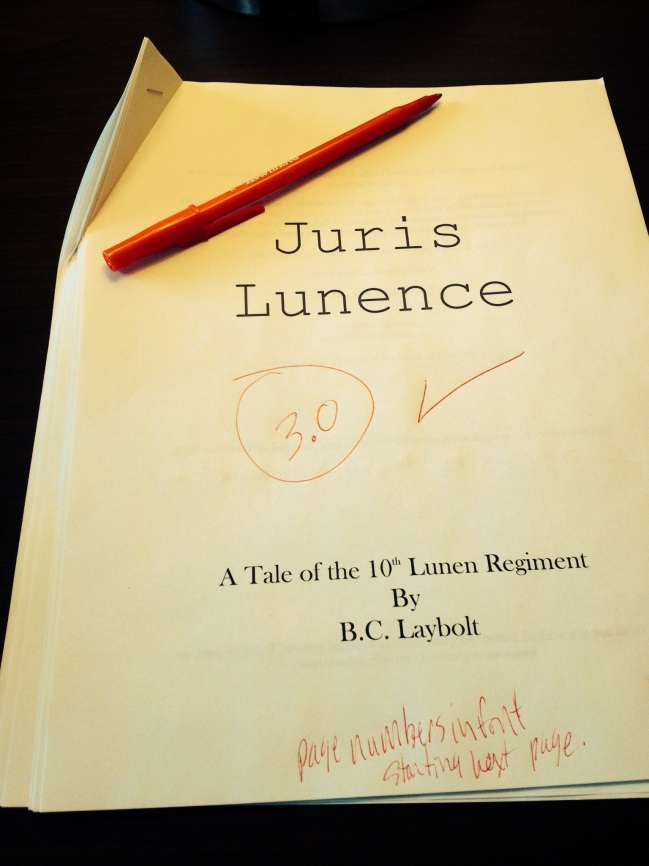 It wasn’t like before. No doubt-filled story arcs and soul-squashing plot questions. I had a plan; a highway, with signs, little yellow marker-bars, and a destination. And I saw the difference in the end result between this story and other stuff. Not that it wasn’t good writing; I really think it stands up.

But not as pain-free as having a qualified eye take my work out of the jar that is my head, and look at it through the microscope of the objective reader.

I was editing before, but not in the way that created the separation required. It’s a lesson I’m ecstatic to learn, especially as an Indie.  Call it a corner in the path, I guess.

One response to “Red Pen-marks are not scars on the soul.”

Just a crazy middle aged lady trying to find sanity in the chaos of life.

The Art of Blogging

A blog full of tips, inspiration and freebies!

Warden of Words // Shaper of Stories

Little flecks of inspiration and creativity

Exploring What Captivates, Inspires, and Intrigues Us.

An exploration of writing and reading

Be Afraid of the Dark...

Table 41: A Novel by Joseph Suglia
unbolt me

Musings and books from a grunty overthinker

"Find what you love and let it kill you." – Charles Bukowski

One Hell of an Apprenticeship